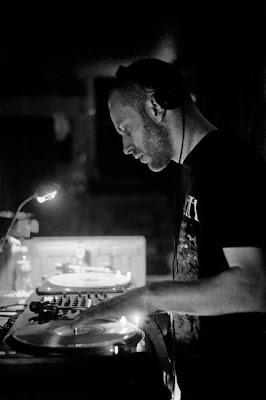 I've said a lot of things here about a lot of DJs, but Self Evident -- Ben Ulis, brother of previously profiled Max -- is a name you're bound to see on a lot of fliers.  In a similar fashion to Taal Mala, he's a dance music encyclopedia, full of knowledge about obscure niche genres but still with one foot in the future at all times for that rare blend of archival expertise and up-to-the-minute freshness.  You can book him for pretty much any show and end up satisfied: he can play jungle, garage, dubstep, house, whatever you want, or he can just do all of those things at once.  It's reasons like that he's one of Vancouver's most ubiquitous and dependable DJs.

His production career is almost as prolific as DJ gigs; following his SoundCloud is a bit of dizzying affair in itself, and that's not to mention other projects like his brotherly collaboration Giant Molecules with Max. The mix he's given here -- no joke, one of [i]three[/i] he submitted in a four month period, the long gestation period of which is entirely my fault -- is composed of all originals, and shows off his current sound: clean, uncluttered, and absolutely devastating, it's all about minute percussive elements and massive, physical subs, attaching footwork-ready twitch to a bass-heavy house template not so far off from the recent goings-on in the UK.  The upbeat "Standing On The Corner" melts down into the sparse "More," all bent-girder basslines and rambling percussion, which quietly blooms into the dayglo R&B of "Treat Me Right" with its high-strung vocal and candyfloss synths.  The restraint and ease that he mixes these tracks together is a reflection of his confident DJing style, and even if this all-originals set doesn't quite illustrate what makes him so fiery behind the decks, it sheds much-needed light on his own output.  He can go from sparse rudeboy menace to orchestral-grime synth palpitations (check the transition from "Take A Knee" to the explosive "Light Up"), and he shows off his newest production side with the "emotional drum & bass" Shapeist tracks, featherweight (yet still muscly, in a wiry way) slices of dnb that tip-toe on seismically shifting sub.

The best way to be truly blown away by Ben is to see him DJ live -- and if you live in or near Vancouver, it's certainly not hard to find a gig he'll be playing -- but his mix here does a fine job of showing that his blending skills translate to production, tracks that don't really sound like anyone else but are completely measured, restrained, and deadly effective: not a moment or a sound is wasted, just pure, dubwise dancefloor pressure.


For about ten years.

What is it about Vancouver that you like, what is it that you don't like, and do you feel like it's the right home for you as a producer?


Vancouver has great food. I don't like the drivers. As far as a jumping off point for a producer it probably isn't the best place -- it isn't somewhere the rest of the world traditionally looks to for music. It is fiercely competitive though, because of all the talent here, which drives me to work harder.

What kind of music do you make -- e.g. how would you describe it ? Do you still think of yourself as a "dubstep" producer in a scene where many of the prominent DJs and producers are starting to make moves towards house or other styles?


I would say that my music is dynamic and eclectic. Hybrid music. I love rave music, world music, classical, metal, hip hop. Basically everything inspires me, and helps me shape what I do or don't like.

I've never thought of myself as a dubstep DJ. Or a dubstep producer. I have dabbled with dubstep. Generally, when I make dubstep speed music (70-140) I am taking more inspiration from crunk and grime music. The Dubforms parties were the most important thing to happen to dubstep in Vancouver, but I don't think any of the members of LiGHTA! consider themselves dubstep artists, just... artists.

Can you outline all of your musical projects? I know you have quite a few things going on right now.


Self Evident is my main one. Wepa is a project with Gameboy + Will Eede, and it derives a lot of inspiration from Latin and Indigenous music. Shapeist is my new alias for emotional drum & bass. Those are the main projects now. I also have ongoing collaborations with Max Ulis, HxdB, Cure, Ronin, MC Thinktank, and Crystal Precious.

You do a lot of collaborative work with other producers, like HxdB or your brother Max. What appeals to you about the collaborative process?


It can be very fruitful, two brains and two refined perspectives can get things done quicker and more decisively. Collaborations can be hard sometimes though, we all make music differently, and therefore we have to go a bit out of our comfort zone to see eye to eye. You need a healthy respect for each other.

Do you do any other musical projects in the city aside from making music and playing out? By the same token, you're one of the underground's most active local DJs; is DJing your dayjob, so to speak? Is that a sustainable living in Vancouver right now?

As someone who used to be associated quite strongly with "dubstep," how do you feel about the "dubstep" scene in Vancouver has developed and where it's gone?


I have never stopped playing dancehall, grime, UK garage, rnb, hip-hop, jungle, and forward thinking dance music. Everyone in Lighta! is into all types of music. We play good music regardless of style.

Do you feel disconnected at all from the current goings-on with dubstep and the mainstream idea of what dubstep is? Is dubstep something you no longer wish to be associated with?


Yes and yes. But that doesn't mean that I dislike where things have gone with mainstream "dubstep." If it means less people liking vacuous pop, nu country, or radio rock, then it's a great thing. We need more people dancing in North America. Way too many people don't even go out.

I find influence in all music, I try to pay respect to all music. Genres are important, they signify excited twists and turns in dance music tastes. But these terms are always getting construed to mean different things.  I'm not gonna detail to you what real dubstep was, you'll have to do your own digging. But certain people like Daega Sound, DJG, Silkie, Michael Red, keep that spirit alive, that dubwise shit that is deep and heavy and soulful and original.  99% of the stuff coming out now calling itself dubstep is not dubstep, it's cookie-cutter bass farting, with epic trancey builds and cheesy vocals. A lot of it is bandwagon jumping. None of it makes me dance.


If one sees "Self Evident" on a bill in Vancouver (as one is wont to do at least once a week here!), what should be expected from the DJ set?

You're known as a DJ who can play sets of pretty much any style of music and do it flawlessly: how long have you been DJing for and where does your extensive knowledge of all sorts of genres come from? It's not always common for a North American DJ to have such a comprehensive and expert grasp of certain styles like you might be said to have.


My older brother and sister introduced me to a lot of music at a young age; rap, early rave, early electronic, industrial, alt rock, trip-hop. When I was in junior high I started producing beats on my dad's computer, in a program made for recording dictations. Max had turntables around since I was in high school.  I have been constantly falling in love with different styles of music for as long as I can remember. I worked at the store Vinyl Records for a few years, that furthered my obsession with gathering influence from a diverse range of music.

What's your favourite style to DJ and why? What's an ideal set for you, in terms of timeslot, length?


I like to play on turntables, with a serato box. I don't plan my sets, but I used to when I started out, and recommend it to other DJs starting out. I have played livepa before, and it is something I dabble with, especially with the Wepa project; that will eventually be a completely live band. But I have al ot of history with turntables, and feel really natural and intuitive with them. I like to play for about an hour, it's long enough to get into a groove, but it leaves the crowd wanting a lil more.

You played a lot of very prominent nights in 2011; what was the most memorable for you?


Probably the last Lighta! All Crew Jam at the Astoria. It had such a fantastic energy.  Basscoast and Diversity are also very special to me. There's a great sense of community at both of these festivals.

How long have you been producing your own music and what kind of stuff do you produce?


I started producing seriously about 12 years ago, seriously meaning OCD, not meaning I was any good -- I wasn't. I didn't understand anything about sound design, EQing, mastering, and all the stuff that makes your music sound good. Recently all that hard work has started to click a little bit, and Max has given me some pointers on my mixdowns, so I'm feeling pretty good about the last few things that I've done.

Are you concerned at all about releases, do you think the model of "releasing" is still important at this point in time?


Releasing is really important, it helps your music to be heard by a wider audience. There isn't a lot of money in it obviously thanks to piracy.

What are some of your past and future releases?


Past releases:
-"Fall Away," a single on Aufect Recordings that included a remix of a Bombaman tune.
-"To You," a song out now on the most recent Acid Crunk comp from Muti Music.
-A remix of Daega Sound's "SOS" with my brother out now on Blipswitch.
-A remix of a Cedaa tune out now on Car Crash Set. "Sapphire"
-A song on the most recent Gradient compilation, compiled by HxdB. "Look In Your Eyes"
-2 EPs with East Van Digital are out now, including the track "Set My Soul On Fire",

Forthcoming releases include;
-EPs with Palms Out Sounds, Innovative Leisure, and Freshmore, all my collaborations with HxdB.
-"Eastsiders" a collaboration with my brother will be released sometime this century on his and Lorne B's label 10 Pin.
-Remix for Meesha coming out on De'fchild productions "Too"
-EP coming out on Crude Records soon, which includes "Armoured Truck", "Hostel" +and"U Know My Love."
- Collaboration with Philthkids forthcoming on Moveltraxx out of Paris.
-EP coming out on my own label Dipped Recordings, featuring songs by me, Frank Grimes + J-Lin. Very excited for this.
-EP almost done with DJ Cure, that will come out on his label Aufect this year...

Finally, explain the mix! What's in it, how you recorded it, etc.


The mix is completely original tunes, mostly brand new ones, including two by my new alias Shapeist.

I made it in Ableton. The EQing and effects were done live, but the layout was predetermined. It is more of what I call a "showcase" mix, more about showing off new productions and less about translating a DJ performance.

Andrew Ryce
I write for Resident Advisor, Pitchfork, Little White Earbuds, FACT, and maybe more. This is my blog. Follow Futureproofing on twitter at @andrewryce

Futureproofing is a place where the musical future is viewed through the knowing lens of the past. Thought and discourse around current electronic music and beyond, what the future holds and what the past held. Alternatively: stuff Andrew Ryce likes.

Friends, Contemporaries, Employers, and Objects of my Admiration